The History of Iron Doors

Here at Southern Front Doors, we offer our customers a variety of products for specific needs. Give your house the best look with elegant and stylish doors. Additionally, each door serves a purpose and has its own benefits. Of all the types, iron doors are the most common because of the security, value, and look it adds to your home. 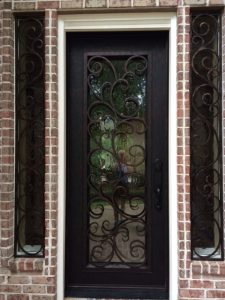 Improve the look of your home with an iron door.

The Birth of the Iron D00r

Iron ore is an important element in Iron doors that has a large percentage of carbon. Firstly, this normally needs to be reduced through many stages in order to become strong and durable material we love. Furthermore, the iron in meteorite iron was a very rare find and considerably valuable in ancient times.

As time passed, smelting and purification methods improved until very pure iron was reached with almost no trace of carbon at all. This developed the name, wrought iron, meaning “worked” iron. Moreover, the iron was constructed into shape instead of just simply being poured into a mold.

At this stage, iron is beautifully malleable and thought and will make marvelous amounts of strain without tearing. Ancient ironsmiths found a number of ways to utilize this fine metal and, up until the 20th century, wrought irons has also been used in the following:

And, of course, doors and much more.

The Security and Style of Iron Doors

Additionally, the idea of making doors out iron came about in the early Middle Ages – around the 9th-10th century. With all the invasions and rise and fall of new empires, people realized that wood was not enough. This pushed them to start building structures with the best material they could find.

Around the 12th century, churches and cathedrals across Europe also began to adopt wrought iron. This was more for style and less for security. These fine doors can be spotted across France, Italy, and England.

Contact your local Southern Front Door today to see how you can get a taste of this history and style at an affordable price! 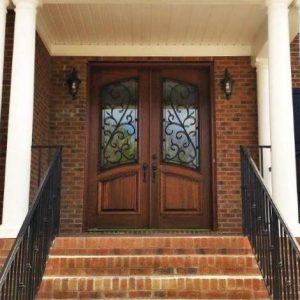